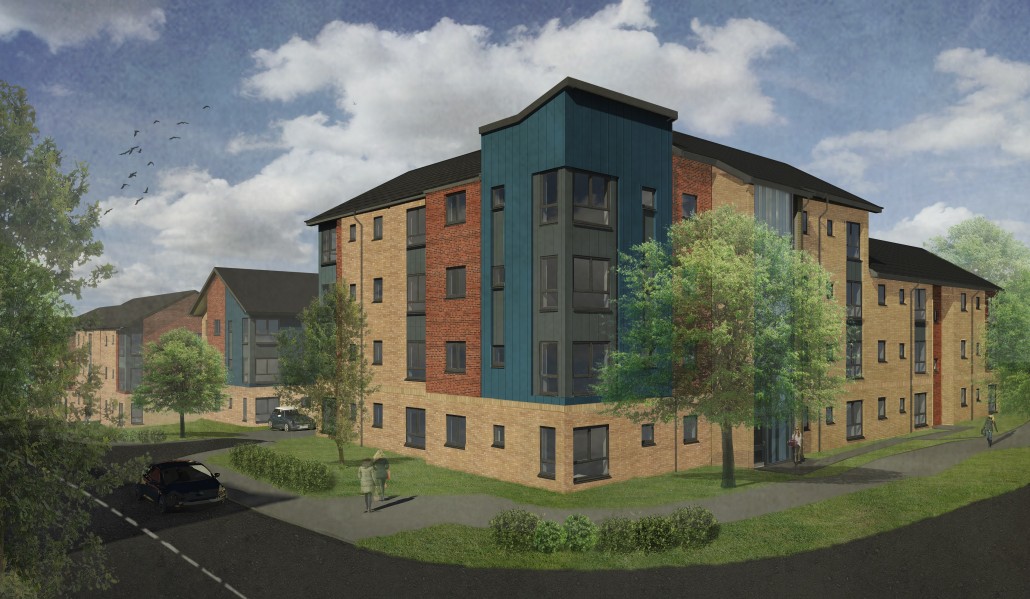 ORA are working closely with Sanctuary Housing Association on a complex £75million regeneration project, and in collaboration with North Lanarkshire Council and the Scottish Government. This project will see the demolition, and re-provision, of twelve 1960’s high rise blocks over four sites, including Berryhill Road,  in Cumbernauld within a ten year period.

Berryhill Road forms one of the sites contained in the overall regeneration project and includes the demolition of 3no. high rise blocks, making way for a new build 80no. unit flatted development. ORA’s proposals successfully demarcate the edge of the private amenity space whilst improving security and the usability of external spaces for residents.

The arrangement of urban blocks along the street edge provide flatted dwellings in a range of sizes over three and four storey’s.

A clear distinction has been made between public and private spaces with the fronts of dwellings overlooking the street, and ground floors separated from the streetscape by semi-private defensible garden space. The creation of secure backcourts and clearly delineated residents’ parking demarcates the areas for public and residents.

The site layout and proposed construction phases were carefully devised by ORA to omit the necessity to decant existing residents from the high rise flats, a prerequisite of the clients brief and a significant concern reinforced through continued community liaisons.

Phase I of the development was completed in September 2016 , comprising of 12 no. flatted units and enabled existing residents to be re-housed prior to demolition works commencing in early 2017.

Phase II commenced on site earlier this year and comprises of 3no. blocks providing a further 45 flatted units. Completion is scheduled for March 2019.